You may have seen his play, “Write/Right” on November 2-4, 2021. Dylan is one of our student supervisors as well as a General Circulation Assistant at the library. He is either at the Library Services Desk, supervisor’s desk or somewhere in the stacks shelving books. 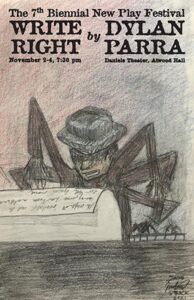 Dylan has worked in the library since Spring of 2019, his freshman year at Clark. According to Dylan, working in the library has allowed him to become an expert in the library’s resources. “I have not paid for textbooks in years! This is all thanks to our reserve system and interlibrary loan system! There is also a great group of friendly full-time staff and student staff who make you forget you’re even doing work.”

When Dylan is not in the library, he is most likely in the Traina Center and the Little Center, when it is not closed for renovations. Dylan obviously loves theatre and enjoys writing and playing music. He also follows politics pretty closely. His clubs are in line with his hobbies. Dylan is the President of the Clark University Players’ Society, which is Clark’s oldest club that has been around since 1908. The club puts on non-musical plays. He also participates in Clark’s Live

Music Booking Club, PEC (Pub Entertainment Committee). Maybe someday we will see Dylan’s name n the New York Times or be a part of the Boston Calling Music Festival if he is not screenwriting some fabulous play.