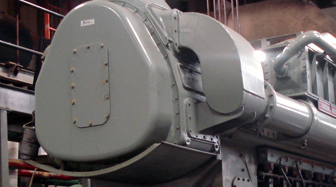 In January 2013 the University brought online its new cogeneration engine, replacing an engine that was installed in 1982. The new and more efficient engine provides more electricity (2.0 MW versus the previous 1.8), while still providing steam and hot water through existing distribution lines. The new engine is clean and efficient, with much lower greenhouse gas emissions and particulates. The fuel source is natural gas. National Grid provided incentives that contributed significantly to the cost of installing the new engine.

Ground-breaking in its time, the Clark Integrated Community Energy System (ICES) still serves as a demonstration model for potential cogenerators—and for energy policy makers—of the benefits to be gained from such plants. One fuel source serves multiple needs, reducing fossil fuel by up to 50% and providing benefits from both a financial cost and environmental degradation perspective.

Such dramatic savings are made possible by a process that uses fuel—in this case natural gas—more efficiently than it is used in the production of electricity at a utility plant. In a typical central station utility plant, 35 percent of the energy produced by burning fuel becomes electric power, but 40 to 45 percent is rejected as “waste” or by-product heat. Utility plants normally dispose of this waste by “dumping” it into a nearby body of water. Another 20 percent is lost up the smokestack of the boiler (or, in the case of nuclear processors, through the condenser).

In the cogeneration process, on the other hand, most of the thermal energy normally rejected as waste in central utility plants is recaptured and used for space heating (or air conditioning) after it has been used for electrical generation. In the Clark system, energy from the input fuel is converted directly into electricity and “waste heat” is recaptured from the engine’s exhaust and surrounding cooling jacket to be used for heating and hot water. Thus, the cogeneration system uses the original fuel nearly twice as efficiently as it would be used elsewhere in the utility system.

The engine and generator operate to supply core campus load, except during regularly scheduled down time for maintenance and a few periods of low thermal demand. From May to September, the heat recovered from engine exhaust, along with the use of independent domestic hot water equipment, allows Clark to shut down its existing boiler plant. During this period, some of the recovered heat is dissipated in a cooling tower on the roof of the library.

During the heating season, exhaust heat is captured in the form of 125 pounds-per-square-inch steam and is supplied to the university steam system. Heat is also recovered from the jacket water and lube oil and is use to heat Goddard Library, Jefferson Academic Center, Geography, Jonas Clark, Math Physics, Lasry Center for Biosciences and Blackstone Hall. On cold days, this heat is supplemented by the boiler plant.

The origins of our cogeneration plant lie in the campus community response to a decade of high energy prices during the 1970s. Students in the Science, Technology and Society program, a precursor to the current Environmental Science and Policy major, initiated the idea of installing a cogeneration plant. A planning team was formed that also involved representatives from the local utility, New England Electric, and the group received a planning grant from the federal government. Construction began in 1980 for what became one of the first grid-connected cogeneration plants in the country.

Mass. Electric Construction Company of Boston served as the principal contract manager for the project. Energy Services Management Corp. of Boston designed and specified the cogeneration system; and the Aldrich Co., Inc., Cochituate, Massachusetts designed the 1½ story building that houses it. The first engine/generator set was built by Fairbanks Morse Engine Division, Colt Industries, Beloit, Wisconsin; and switch gear was designed and built by Russelectric Inc. of Hingham, Massachusetts. Commonwealth Gas Company serves as the system’s supplier of natural gas. From the outset, the project had financial support from the Department of Energy, and received a $1.2 million loan through the Department of Housing and Urban Development in addition to outright grants from the George F. and Sybil H. Fuller Foundation and the Wyman-Gordon Company, both of Worcester.

The cogeneration engine, originally designed for use in a submarine, was in use until late spring 2012. During its first quarter-century of operation, the plant produced approximately 197,000 million BTUs of steam heat and 114,000 million BTUs of hot water for the campus, alongside the electricity generated. The older engine was dismantled and removed in fall of 2012 after 30 years of faithful and sustainable service. Its parts were recycled.

A Model for Others

As a country that has underutilized the cogeneration process, the United States might benefit dramatically from encouraging emulation of the Clark model. For every 45 minutes that the Clark cogeneration system is operating, it saves the equivalent of one barrel of oil. If similar cogeneration processes could be used to produce one half the electricity currently gathered in the United States by oil and gas, the savings nationally would amount to more than 1.5 million barrels of oil in a single day.