Racial Bias in the Jury Selection

Judge Guzman of the Massachusetts District Court, and a Clark alum, will give a talk on the issue of racial bias in the jury selection process.  Some of the videos she will show will star Clark students, who helped with a training video for state judges who met at Clark on March 22, 2019.

Judge Guzman graduated B.U. School of Law 1992, admitted to the Massachusetts bar in 1993, and was sworn in a District Court judge in 2009

Refreshments will be served 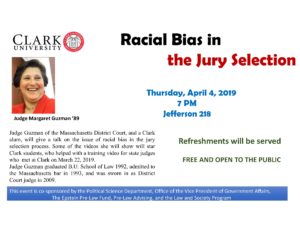