Technologies of Resistance and New Womanhood in Contemporary Bollywood Cinema 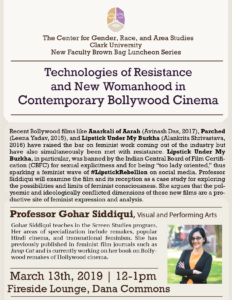 Recent Bollywood films like Anarkali of Aarah (Avinash Das, 2017), Parched (Leena Yadav, 2015), and Lipstick Under My Burkha (Alankrita Shrivastava, 2016) have raised the bar on feminist work coming out of the industry but have also simultaneously been met with resistance. Lipstick Under My Burkha, in particular, was banned by the Indian Central Board of Film Certification (CBFC) for sexual explicitness and for being “too lady oriented,” thus sparking a feminist wave of #LipstickRebellion on social media. Professor Siddiqui will examine the film and its reception as a case study for exploring the possibilities and limits of feminist consciousness. She argues that the polysemic and ideologically conflicted dimensions of these new films are a productive site of feminist expression and analysis.

Gohar Siddiqui teaches in the Screen Studies program. Her areas of specialization include remakes, popular Hindi cinema, and transnational feminism. She has previously published in feminist film journals like Jump Cut and is currently working on her book on Bollywood remakes of Hollywood cinema.