Jewish Entanglement In The Atlantic World

In the 17th and 18th centuries, Jews lived and worked in various parts of the Americas, from Dutch Brazil to British North America, and across the Caribbean.

Five scholars will shed light on the following questions:

Did Jews identify with the empires in which they lived?

Did they build bridges to other empires as traders and brokers?

What ties did they establish to other religious and ethnic groups in the colonies in which they lived? 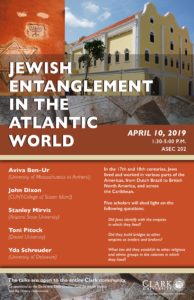