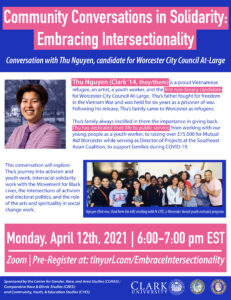 Thu Nguyen (Clark ’14, they/them) is a proud Vietnamese refugee, an artist, a youth worker, and the first non-binary candidate for Worcester City Council At-Large. Thu’s father fought for freedom in the Vietnam War and was held for six years a prisoner of war. Following his release, Thu’s family came to Worcester as refugees. Thu’s family always instilled in them the importance in giving back. Thu has dedicated their life to public service, from working with our young people as a youth worker, to raising over $75,000 for Mutual Aid Worcester while serving as Director of Projects at the Southeast Asian Coalition, to support families during COVID-19.

This conversation will explore Thu’s journey into activism and youth work, interracial solidarity work with the Movement for Black Lives, the intersections of activism and electoral politics, and the role of the arts and spirituality in social change work.