The State of the Gaming Industry: A Conversation with Stanley Pierre-Louis ’92

The video game industry is one of America’s fastest growing and complex, a maze of legal, policy, and regulatory concerns and opportunities. The Entertainment Software Association (ESA) is the industry’s voice and advocate on issues as wide-ranging as diversity, safeguarding personal data, digital wellness, esports, First Amendment rights, immigration, in-game purchases, and intellectual property. From his vantage as the President and CEO of the ESA, Clark University alumnus Stanley Pierre-Louis ’92 has a unique perspective on how the video game industry impacts business, entertainment, and culture. In this final event of the Higgins School’s symposium, he joins Paul Cotnoir (Dean, Becker School of Design and Technology) in a conversation about the ever-evolving role of the entertainment software business in creating meaningful and positive change in the world.

Admission is free and open to the public. All audience members are expected to comply with Clark University’s most current vaccination and masking policies. Those who cannot attend in person are invited to join the live stream:

Sponsored by the Higgins School of Humanities at Clark University

Stanley Pierre-Louis serves as the President & Chief Executive Officer (CEO) of the Entertainment Software Association (ESA), the voice and advocate for the U.S. video game industry. In this capacity, he leads the ESA’s public policy efforts to showcase the dynamic impact the video game industry has on business, entertainment and culture. The ESA also owns and operates E3, the industry’s premier trade show and marketing event.

Stan has more than twenty-five years of experience in the entertainment media space. Prior to being named ESA’s CEO in May 2019, he served as the organization’s General Counsel, leading the legal, policy and regulatory affairs function for the organization. His responsibilities management of all legal, policy and regulatory matters and oversight of all contractual, compliance and governance matters, including serving as Corporate Secretary to the ESA’s Board of Directors.

Before joining the ESA, Stan was Senior Vice President and Associate General Counsel for Intellectual Property at Viacom Inc., served as Senior Vice President for Legal Affairs at the Recording Industry Association of America, and worked at leading law firms. Stan is a Phi Beta Kappa graduate of Clark University (Worcester, MA). He earned his law degree from the University of Chicago Law School, where he served on the University of Chicago Law Review Board of Editors. Following law school, he clerked for Judge David A. Nelson of the U.S. Court of Appeals for the Sixth Circuit.

Stan serves as chair of the board of directors of GetSwift Technologies Limited, a publicly traded  technology company that produces delivery management software. In addition, he serves on the board of Games for Change, a non-profit organization that empowers video game creators and social innovators to drive real-world impact through immersive media. And, he serves on the board of the National Symphony Orchestra, one of the nation’s leading orchestras and a constituent of the John F. Kennedy Center for the Performing Arts. 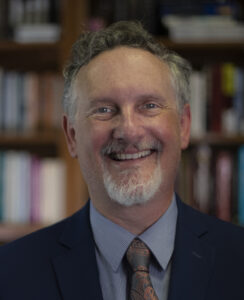 Paul David Cotnoir joined Clark University in 2021 as Dean of the Becker School of Design & Technology. Prior to Clark, Dr. Cotnoir served in various capacities at Becker College from 2002 to 2021 including Associate Dean of the School of Design & Technology where he helped to create and lead the College’s highly ranked Interactive Media Design program. Before Becker College, he worked in the field of Robotics and Automation, serving as the Director of the Manufacturing Engineering Applications Center at Worcester Polytechnic Institute, where he still teaches graduate courses in Mechanical Engineering. Dr. Cotnoir’s leadership at Clark and Becker builds upon his undergraduate and graduate engineering degrees and his various administrative roles in higher education, industry, and the public sector. He earned his doctoral degree in manufacturing engineering from WPI in 2010.