This Friday we will be hosting an initial conversation with Dr. Milanez to learn about his work with indigenous and quilombola communities in the Brazilian Amazon. His work in political ecology and environmental humanities examines the relationship between different forms of dispossessions and aggressions to the environment and indigenous, and traditional communities’ forms of resistance. Milanez is co-editor (with Beatriz Bustos, Gustavo Garcia, Diana Ojeda and Salvatore-Engel-Diamauro) of The Environment in Latin America (forthcoming, Routledge); and co-author of Guerras da Conquista (2021, Harper Collins). He has also co-produced a number of documentaries and film projects and he is a columnist for Carta Capital and Mídia Ninja.

Friday, September 17 at 4:30 pm at Libbie Lounge – Geography Building
or
Join us via Zoom 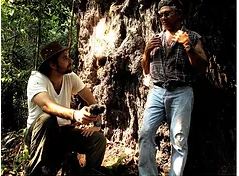