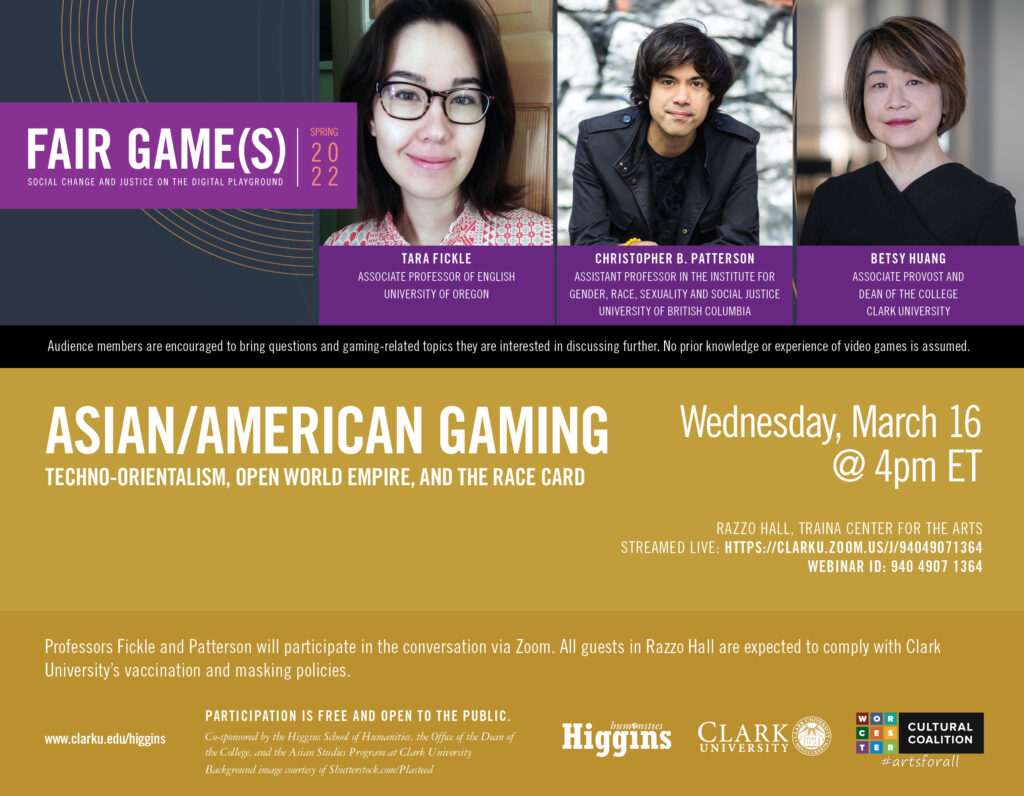 Since the Nintendo Entertainment System in 1985, Asia has remained the center of video game hardware manufacturing (China and Southeast Asia), the center of game innovation and the birthplace of most game genres (Japan), and the largest reliable resource of consumers (nearly half of game players reside in Asia). Game scholars Tara Fickle (University of Oregon) and Christopher B. Patterson (University of British Columbia) ask how video games, in being inextricably tethered to Asia, continue to produce new racializations of Asians around the globe, and the varied impacts that games have had on Asian diasporas in North America through forms of digitization, “gamic” worlds, and play itself. This talk — imagined partly as a dynamic conversation between Fickle, Patterson, Dean Betsy Huang (Clark University), and the audience — will explore a range of relevant contemporary topics in Asian/American gaming, such as esports, visual novels, racial representations, gender, labor, and industry culture. Audience members are encouraged to bring questions and gaming-related topics they are interested in discussing further. No prior knowledge or experience of video games is assumed.

Please note that Professors Fickle and Patterson will participate in the conversation via Zoom. However, Dean Huang will host a live audience in Razzo Hall at the Traina Center for the Arts on the Clark University campus. All audience members are expected to comply with Clark University’s most current vaccination and masking policies.

This event is co-sponsored by the Higgins School of Humanities, the Office of the Dean of the College, and the Asian Studies Program at Clark University.

Tara Fickle is Associate Professor of English at the University of Oregon, and Affiliated Faculty of the Department of Indigenous, Race, and Ethnic Studies, the New Media & Culture Certificate, the Center for the Study of Women in Society, the Center for Asian and Pacific Studies, and the Comics and Cartoon Studies and Digital Humanities minors. Fickle received her Ph.D. from the University of California, Los Angeles, and her B.A. from Wesleyan University. She works at the intersections of critical race studies and game studies. Fickle’s work has appeared in journals such as Modern Fiction Studies and MELUS, as well as various public humanities portals. Her first book, The Race Card: From Gaming Technologies to Model Minorities, (NYU Press, 2019, winner of Before Columbus Foundation’s American Book Award), explores how games have been used to establish and combat Asian and Asian American racial stereotypes. Fickle is currently working on a digital archive and analysis of the canonical Asian American anthology, Aiiieeeee!, with additional research projects on Chinese gold farming and the racialized dimensions of esports. She also runs You on the Market, a comprehensive website for academic job-seekers. More information can be found at tarafickle.com and Aiiieeeee.org.

Christopher B. Patterson (Ph.D., University of Washington) is an Assistant Professor in the Institute for Gender, Race, Sexuality and Social Justice at the University of British Columbia. He researches transpacific discourses of literature, video games, and new media through the lens of empire studies, Asian American studies, and queer theory. His first book, Transitive Cultures: Anglophone Literature of the Transpacific (Rutgers University Press, 2018), won the Shelley Fishkin Award for Transnational American Studies, and his second, Open World Empire: Race, Erotics, and the Global Rise of Video Games (New York University Press, 2020) was a finalist for both the 2020 Speculative Fictions and Cultures of Science Book Award, and the 2021 John Hope Franklin Publication Prize of the American Studies Association. He writes fiction under his matrilineal name, Kawika Guillermo, and his debut novel, Stamped: an anti-travel novel (2018), won the 2020 Association for Asian American Studies Book Award for Creative Prose, while his follow-up speculative fiction novel, All Flowers Bloom (2020), won the 2021 Reviewers Choice Gold Award for Best General Fiction/Novel.

Betsy Huang is Associate Provost and Dean of the College, the Andrea B. and Peter D. Klein ’64 Distinguished Professor, and Associate Professor of English at Clark University. She was Clark’s inaugural chief officer of diversity and inclusion from 2013 to 2016, and also served as director of the Center for Gender, Race, and Area Studies from 2017 to 2019. As Dean of the College, she is responsible for the development and implementation of undergraduate academic programs and policies toward ensuring the quality of Clark’s signature LEEP educational experience. Dean Huang has published multiple books — a monograph, Contesting Genres in Contemporary Asian American Fiction (2010), and two co-edited essay collections: Techno-Orientalism: Imagining Asia in Speculative Fiction, History, and Media (2015) and Diversity and Inclusion in Higher Education and Societal Contexts (2018). Her work has appeared in The Cambridge Companion to Asian American Literature, Journal of Asian American Studies, and MELUS, among others. She co-edited a volume in a new series commissioned by Cambridge University Press, Asian American Literature in Transition (2021).