The Alumni Magazine of the Clark University Geographical Society 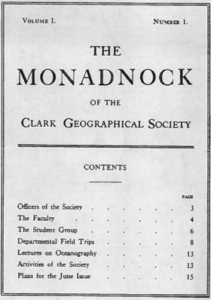 The Clark University Graduate School of Geography is still young. Nevertheless, those of us who know it have full confidence that it is really the center of modern geographic sciences in the Americas, if not the entire world… We have every essential for a strongly cemented academic, social and professional bond. Now…is the most auspicious time for the establishment of a firm union.

With this confident appraisal of a six-year old department, Clark University Geographical Society (CUGS) member John Gould Curtis argued for the continuing of an experiment started a year earlier: the establishment of a magazine that would keep alumni in contact with students. For over five decades, The Monadnock fulfilled this goal. Circulation to alumni around the world had exceeded 600 by the end of its run in the mid-1980s.

Thanks to the generous support of the alumni and the Graduate School of Geography (GSG), a new issue of The Monadnock was published in fall 2014. The magazine’s re-launch was spurred by the interest of current Ph.D. students in learning more about, and sharing, the history and traditions of CUGS, as well as the desire to strengthen bonds with alumni.

In choosing the name Monadnock nearly 90 years ago, CUGS opted for a word of “distinctive New England origin” that is also “fundamentally geographic.” Like the first editors of the magazine, the present editors hope that their endeavor lives up to the scientific connotations of monadnock: that the magazine may have a “resistance to the wear of time and adversity, and a standard above the general level and dull routine” that will allow it to run for at least another half-century.

View the October 2014 Monadnock, the first issue of the relaunch