Doctoral level research depends upon comprehensive library holdings, and Center faculty and students enjoy a first–class library with more than 10,000 titles and a growing archival collection that provides students access to primary source material. Originally conceived as a library for Holocaust research, with the Center’s mandate expanded to genocide studies, the range of titles has broadened. It continues to grow, with acquisitions from other genocides.

Access to the library is by appointment only.  Please call the library (508) 753-3761 or email librarian Robyn Conroy at  rconroy@clarku.edu.

“Sitting in the library, reading about the Holocaust, you always have a way out to the city, to the history of the house, the garden, the sky, to the present,”
—Julian Bonder, Architect

The Collection includes a broad range of materials on Holocaust and Genocide including:

When searching the catalog, please make sure the location of the book is listed as Rose Library Stacks.  Rose library is a non-circulating library.  If you would like special permission to check out a book, please call the library (508) 753-3761 or email librarian Robyn Conroy at  rconroy@clarku.edu.

From the late 1990’s until her death in 2011, Diana Bartley was dedicated to collecting books on behalf of the Strassler Center’s Rose Library.  Growing up in the midwest, the daughter of a Navy captain, she closely followed the events of the War in Europe. She was horrified reading about accounts of the Holocaust.  After a varied career as an automotive journalist, an editor at Esquire Magazine, and a financial consultant, she began collecting books about the Holocaust and newspaper clippings on the subject.  Reading about the founding of the Strassler Center, she inquired about donating her collection of 1,500 volumes.  After that initial gift, she continued to meticulously research and collect books, donating 500-600 books annually.  Ms. Bartley continued to purchase and donate books until her death in July, 2011.  Today, the Bartley collection comprises over 7,000 books encompassing many genocides, and including Holocaust materials dating from 1933 to 1947. 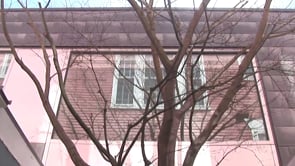 Hear Diana Bartley's story in her own words.

The Diana Bartley Book Collection, including thousands of books contributed over more than a decade, forms the spine of the Rose Library. It also includes books from the Barry D. Hoffman Collection. We gratefully acknowledge them both, generous friends and inveterate book collectors.

We collect books in the belief that we are preserving them when in fact it is the books that preserve their collector.
—Walter Benjamin