After sitting home for over a month in the early part of the pandemic, Haley McCurry ’22 decided she needed a creative and expressive outlet. Haley, a political science major at Clark University, developed this outlet and joined the Entrepreneurship and Innovation Program’s Clark Tank 2022 – Venture Development this fall with her pandemic hobby turned small business, Haley’s Handmades. 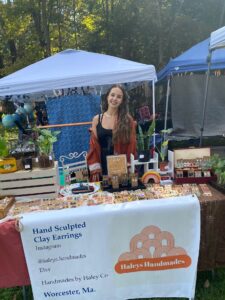 Haley first became interested in earring design when she came across someone selling clay earrings for a price way higher than she could ever imagine paying. She loved the look of the earrings and knew she could make them too!  A week after this revelation, she had the supplies and began testing and making earrings. At first, she was not very confident in her work, but after much trial and error, began to like what she was making more and more. With her newfound confidence, she decided to mail some of her designs to close friends. Haley and her friends are spread across the country and it felt exciting to be able to send them something when she knew they were struggling during COVID. The joy it brought her and her friends made the distance and the miles seem just a bit closer. 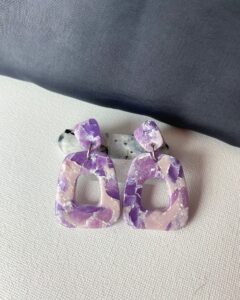 After a positive response from her friends, Haley started an Instagram account to begin sharing what she was crafting, and got her first order! A mom of one of the friends she sent earrings to requested a pair in a custom color scheme of a previous design she posted on Instagram. After that sale, she was officially in business as Haley’s Handmades!! In June of 2020, Haley moved to Worcester in the midst of the pandemic and decided it was time to open an Etsy shop.

During the fall 2020 semester, Haley continued to sell to friends and family, but she admits her creativity definitely was sidelined during a difficult semester. However, since there was a longer than usual break between the fall and spring semesters due to COVID, Haley had a bit of extra time on her hands and began to focus on growing her business. By the time the spring 2021 semester rolled around in early February, Haley was ready to expand her sales. She began selling at the Clark Collective pop-up and received overwhelming support!  She is often asked if she is a studio art major and cannot help but giggle because a year and a half ago she would have hardly considered herself crafty, but clay changed all that. Additionally, Haley started selling at an outdoor art market at the local art store, CC Lowell, where she connected with a great network of artists and entrepreneurs.

Everyone was so kind at the popups and the art market, complimenting me on how unique my art was which encouraged me to pursue selling my earrings full time in the summer of 2021. – Haley McCurry 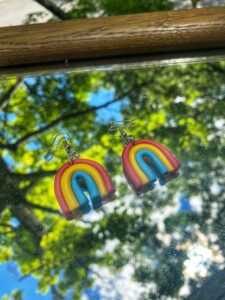 What strikes Haley the most about entrepreneurship is the flexibility it provides. This past summer Haley was involved in a severe accident, which resulted in 12 staples in her head and a serious concussion. She believes that if she had been working a typical 9-5 job she might not have recovered as successfully as she did. Instead, she used her art as an avenue to heal. Before the accident, she had been studying for the LSAT and thought the repercussions of her accident would derail her studies.  However, due to owning her own business, she was able to take time for herself and concentrate on her recovery. It was the art that helped her build her concentration back and she was able to successfully complete the LSAT only 5 weeks after the accident.

Since starting back at Clark this fall, she has received even more support than in the past semesters. The money she has made from Haley’s Handmades has allowed her to support herself so she can continue on to law school next fall.  She will graduate from Clark this coming December and with her semester off she plans on taking silversmithing classes to expand her jewelry-making business. She is looking to continue her jewelry-making as a way to support herself through her academic career. Haley says she is very lucky to have found such a motivating passion.