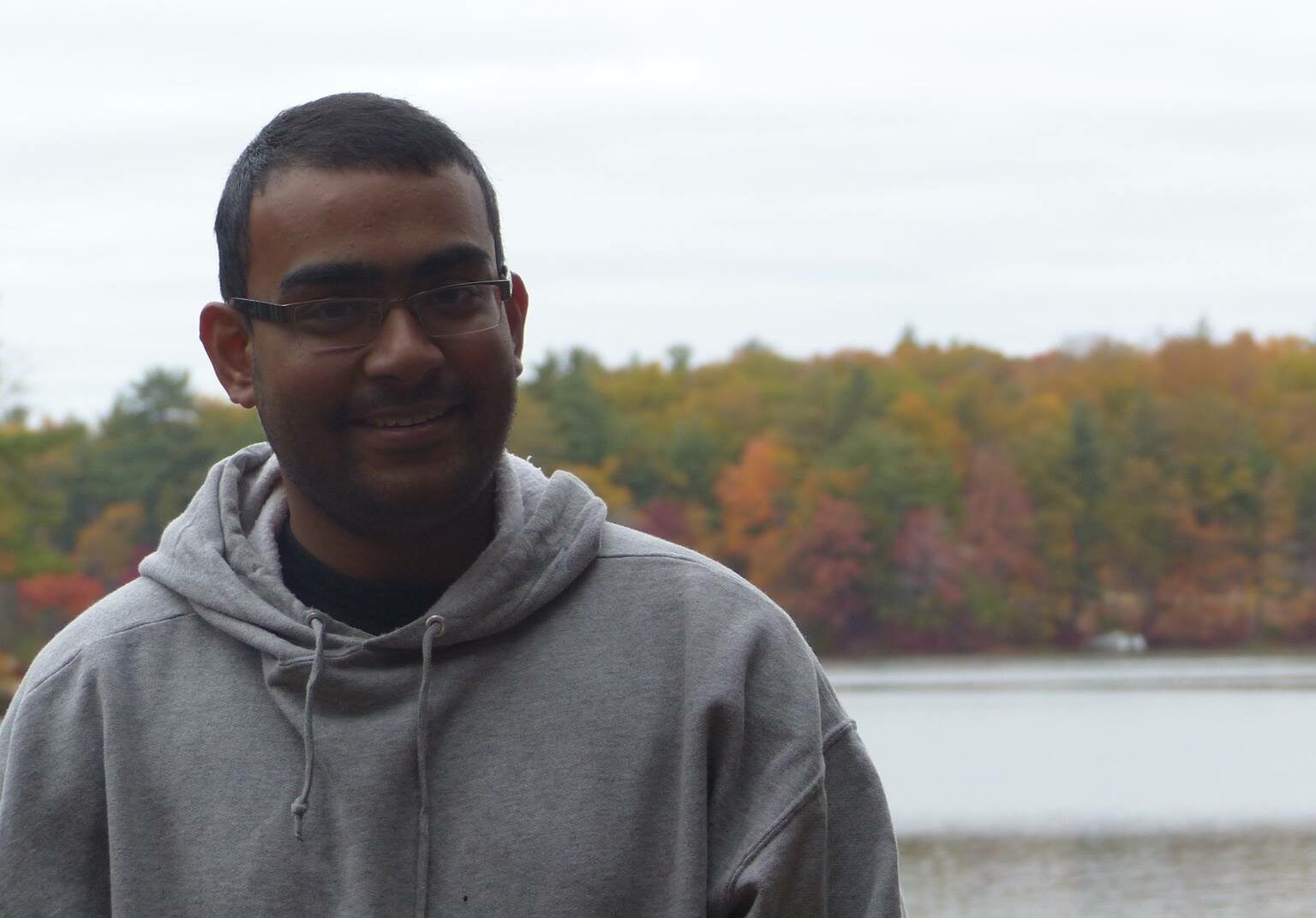 Clark University offers eight world-class Ph.D. programs. The Biology Department’s small and intimate size allows for collaboration and engagement with top faculty, drawing students from all corners of the world. The Department’s primary research areas include Molecular and Cell Biology, Ecology and Evolution, and Biochemistry. We sat down with one of the program’s recent graduates, Abhinav Sur (2014 – 2020), to reflect on his time here at Clark and his interesting journey to Worcester.

Hailing from the “City of Joy”, Calcutta, India, Ph.D. graduate Abhinav Sur had been diligently working on his Ph.D. for the last 6 years. Before coming to Clark, he received his Master’s (M.Sc.) from the National Institute of Science Education and Research (NISER), an institution affiliated with the Indian government’s Department of Atomic Energy. Abhinav joined Clark University in 2014 and defended his Ph.D. in March 2020. It was Clark’s small size and the Biology department’s keen focus on Evolutionary Biology that drew Abhinav to Clark. However, it was the prospect of living in New England (and near Boston) and Clark’s structured Ph.D. program that solidified his choice. Abhinav has made momentous strides in his work and has created memories and connections that he will look back on fondly.

Abhinav spent long hours in the lab conducting research on the evolution of nervous systems in the animal kingdom, specifically neurogenesis (how nervous systems develop) in the annelid Capitella teleta, which has been greatly understudied historically (Image 1). Under the supervision and mentorship of Dr. Néva P. Meyer, Abhinav used both candidate and systems biology approaches to understand how annelids develop their nervous systems in comparison to other animals.

SUR: “During my Master’s, I characterized the use of carbon and gold nanoparticles to safely deliver and increase the efficacy of antimicrobial peptides (AMPs) in vitro. These peptides are capable of directly priming the immune system and hence are touted as the alternative to antibiotics in order to combat bacterial multidrug resistance.”

This work led to Abhinav’s first publication as a first author. During his undergraduate degree, Abhinav was fascinated by Ecology and Wildlife Biology, which led him to pursue summer internships with various groups working on human-elephant conflict in the Valparai plateaus of South India and landscape genetics of Cardamom cultivars in the Himalayas.

What drew you to Clark University’s Biology Department?

SUR: “I was always excited about understanding Biology through an evolutionary lens and that attracted me towards the Biology department at Clark. Moreover, the prospect of living in New England and Clark’s structured Ph.D. program was something that led me to decline other Ph.D. offers from Canada, Scotland, and India. At the end of my Ph.D., I do not regret my choice at all!”

During his time at Clark, Abhinav has had numerous opportunities to further develop his research as well as publish and present his work at global conferences. His work has appeared in several highly reputable journals.

What opportunities have you had during your time here at Clark University?

SUR: “I had the privilege of traveling to different conferences within the US to present my work to other established researchers of my field. My research at Clark led to two publications so far – one in 2017 in a journal called EvoDevo and another in 2020 in BMC Evolutionary Biology. I would like to thank my advisor Dr. Néva P. Meyer for her constant support and encouragement to do better.”

Abhinav’s 2017 article in EvoDevo has been one of the most highly accessed articles amongst others that were published in the journal around the same time. For the third chapter of his Ph.D. dissertation, Abhinav undertook an ambitious enterprise to parallelly sequence the single-cell transcriptomes across all cells in the annelid Capitella teleta. Abhinav’s third chapter from his Ph.D. dissertation is now online as a preprint on a server called biorxiv and is currently under peer-review to appear in the journal Frontiers in Ecology and Evolution. Abhinav’s trailblazing work is one of the first high-throughput single-cell RNAseq studies conducted on an annelid.

SUR: “We have submitted this work for publication and eagerly waiting to see what the reviewers think about our work.”

Abhinav’s high-throughput study will be one of the first single-cell RNAseq approaches to be done on an annelid and the first to be done on Capitella teleta. To conduct this work, Abhinav applied for and successfully received a $1000 grant from Sigma XI (Grants-in-Aid-of-Research). He also successfully helped his supervisor apply for and acquire the Beavers and Faculty Development grants awarded by Clark University.

SUR: “Compiling all these funds from multiple sources allowed us to take a shot at such a huge enterprise of sequencing thousands of individual cells to create a whole-organism cellular and molecular atlas.”

During his time at Clark, Abhinav presented his research at various conferences such as the Society of Integrative and Comparative Biology (SICB) in 2016 and 2019, Society of Developmental Biology (SDB) in 2015 and 2017, and the 2018 meeting of the annual North-East Developmental Biology at the Marine Biological Laboratories in Woods Hole, MA. This eventually brought him to present his research at Harvard University, which helped secure his current position at the National Institutes of Health (NIH).

Abhinav currently works as a postdoctoral researcher at the Eunice Kennedy Shriver National Institute of Child Health and Human Development at the National Institutes of Health (NICHD/NIH) in Bethesda, Maryland. During this time, he plans on using single-cell RNAseq approaches or single-cell ATACseq approaches to further his understanding of cell-fate specification events during zebrafish development. Abhinav has now shifted his Ph.D. work on invertebrate models to vertebrate models. Such widely used vertebrate models can be used to further investigate how cells decide what they want to become during development and what trajectories different cells follow.

Now having finished his Ph.D. at Clark, Abhinav is excited for what the future holds. Equipped with new skills and experience working on embryology and developmental biology of invertebrates and vertebrates, Abhinav envisions himself as a comparative biologist.

What do you hope to do now that you have finished your Ph.D.?

SUR: “In the future when I start my own lab, I would like to use systems biology approaches to comparatively explore the developmental biology of several animals, both invertebrates and vertebrates, that will be instrumental in understanding the evolution of developmental patterns, as well as better modeling human developmental disorders.”

Abhinav looks fondly back on his last 6 years at Clark. During his time as a Ph.D. student, Abhinav spent most of his time in the laboratory as his work demanded that. However, when not in the lab, he enjoyed playing volleyball at the Kneller Athletic Center and enjoyed nearby restaurants, especially Bahn Thai on Park Ave, named by Abhinav as a strong competitor to his favorite Indian cuisine.

What were some of your favorite spots at Clark or in Worcester?

SUR: “… I spent a lot of time dining at Bahn Thai – so much so that I used to joke that they may announce me as their shareholder soon!”

As a molecular biologist, Abhinav sees how the Biology department is making a shift towards high-throughput biology approaches. Biology in the 21st century is beginning to rely on Big Data and machine learning. Our department here at Clark is beginning to make that shift.

What are some resources that are underutilized in the department that you wish more students knew about? Now that you have graduated from Clark, what do you hope to see the Biology department do?

SUR: “Our department recently bought a new fancy qRT-PCR machine as well as a micro-encapsulator microfluidic-based cell capturing device that can be used to capture cells for single-cell sequencing. These, with a few technical tweaks, will allow people in the department to interrogate at the whole-genome or a systems level. I hope to see the Clark Biology department move in that direction more in the future.”

Why should a prospective student interested in research or in Biology put Clark University on their list?

Abhinav highly recommends the Ph.D. program at Clark –  for students interested in the small class sizes, which allows one to collaborate and closely interact and work with everyone. The diversity of research topics at Clark allows for an onus to perform interdisciplinary research. For his second publication, Abhinav collaborated with Dr. Philip Bergmann for his input on complex biostatistical analysis on datasets which gave another dimension to his publication. The small size and cordial nature of the Biology department allows for one to approach anyone with questions they may have.

SUR: “The professors were approachable with anything and their doors were always open for us graduate students as well as undergrads. I have had many conversations with the professors on cricket, soccer, politics, food, etc. I really appreciated that about the Biology department. I will miss the pizza and drinks after seminars every Wednesday where we used to hang out together as a department and chat about any random topics.”

What are your final thoughts on Clark and your experience in its entirety?

SUR: “At the end of my Ph.D., reflecting back, I do not regret my choice of coming to Clark at all. I also found the people here at Clark to be very cordial and welcoming and I had a fantastic experience here during my last 6 years. I would like to thank the whole Biology department at Clark for making this a welcoming and fruitful experience for me. I have felt more welcomed here than I ever did in my own country.”