Associate Provost and Dean of Research and Graduate Studies

Dr. Yuko Aoyama is an economic geographer with interests in globalization, technological innovation, and industrial organization, and has taught courses on Asia’s industrialization; economic geography; globalization; and internet geography. She received her doctorate in city and regional planning from the University of California, Berkeley in 1996; a master’s in urban planning from the UCLA; and a bachelor’s in liberal arts from the International Christian University, Tokyo. Before coming to Clark in spring 2000, she taught in the Department of Geography at the University of Georgia.

Aoyama has been awarded research grants and fellowships from the National Science Foundation, Social Science Research Council, Rockefeller Foundation, National Geography Society, and the Association of Asian Studies. She has published books and articles on the transformation of technology-intensive industries, ranging from information technology entrepreneurship, logistics providers, and video game developers, in the United States and Japan. She also has examined state-industry relations in various geographical contexts, including sectors such as health and renewable energy (India) and tourism (Spain). Most recently, her research interest has shifted to the question of governance, with a particular focus on collaborations between for-profit and nonprofit organizations. Her most recent book, “The Rise of the Hybrid Domain: Collaborative Governance for Social Innovation” (Edward Elgar, 2016), analyzes such cross-domain collaborations in India’s social innovation ecosystem.

Previously at Clark, Aoyama was editor-in-chief of Economic Geography (2006-14) and associate director of the Graduate School of Geography (2009-10). She also has served the American Association of Geographers in various capacities, most recently as a member of the Finance Committee (2015-18).

She has lived in four countries and traveled extensively in Asia and Europe. 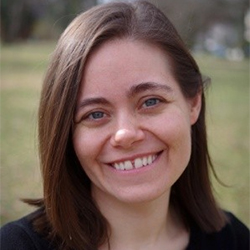 Assistant Dean of Graduate Studies for Arts and Sciences

Ellen Eck arrived in January 2020 and serves as the Assistant Dean of Graduate Studies for Arts and Sciences. In this role, she conducts strategic planning for the GSAS in its direction, process, and procedures. She provides oversight for academic and operational efforts within the GSAS, including graduate student onboarding and orientation, commencement, and graduate student associations and programs.

Prior to coming to Clark, Ellen was the Associate Dean of Academic Affairs at the Graduate School of Arts and Sciences at Georgetown University, where she was responsible for the accuracy and integrity of records, registration, degree progress, and graduation for students enrolled in the Graduate School’s master’s, doctoral, and graduate certificate programs. She has also held positions at Harvard Law School and the Harvard John A. Paulson School of Engineering and Applied Sciences.

In her free time, Ellen enjoys reading, travel, and quality time with her family.

Dean of Research and Graduate Studies