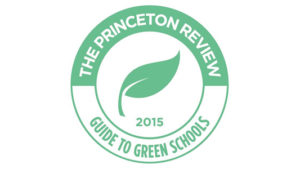 Right up there with institutions known for their highly visible sustainability features, Clark’s green beating heart shines through! We might not have a giant solar array, but Clark has a long and strong tradition of stewardship and innovation, on and off-campus. Our dozens of student-led initiatives, research, and deep institutional commitment to sustainability demonstrated to the prestigious Sierra Club that Clark is a very Cool School. Princeton Review agrees, placing Clark in the top tier of Green Colleges for the eighth year in 2017 – since the publication of the Guide! Clark’s Graduate School of Management is recognized by Entrepreneur magazine as a top green business school and is ranked among the top 100 in Beyond Grey Pinstripes, Aspen Institute’s guide to sustainable business programs worldwide. Forbes magazine named Clark as a top entrepreneurial school, partly due to alumni’s green business efforts! Although rankings are important, Sustainable Clark is more than a number. It is our collective, innovative collaborative effort; supported by the University’s values and culture, that adds substance to all our top rankings.

Clark’s newest building boasts a full roof solar array that will provide up to 50% of the building’s energy needs, a landmark for the city of Worcester and for the University. Additional solar panels may be added to the parking lot in the future, bringing the ASEC to net-zero energy! But solar is just the start of this LEED Gold Certified building’s sustainability features! An innovative, holistic building-wide energy management system that includes individual room controls with temperature set points, occupancy (motion) and ambient (daylight) lighting sensors and advanced temperature control monitoring in public spaces is designed to allow personal comfort while saving energy in the all-electric building. The building itself is oriented to allow for maximum ‘daylight harvesting’ to reduce overhead illumination and offset winter heating with passive solar; light-permitting solar shades are operational on every window. The windows open, too, for fresh air! To help occupants eliminate needless waste, recycling and compost bins are on every floor and in the café. Trash cans were not provided in offices – since the only trash is plastic film, there is no need for them. Four water bottle filling stations with centralized filtration, low flow fixtures, and non-irrigated landscaping will help to reduce water usage. The landscape architect prioritized native and resilient species, including plants to attract wildlife and birds. Recycled materials feature significantly in the glass and steel structure, while approximately 90% of the furniture is repurposed. The rooftop solar array will win Clark University SREC’s to credit against other greenhouse gas emissions and contribute to our Climate Action Plan.

The 2014-15 SSF awards funded reusable “People Towels” for Clark Cougar Athletics teams and Bickman Fitness Center users, and support the installation of 5 more water bottle filling stations in residence halls and academic buildings. READ MORE… Since its inception in 2012, the SSF has awarded 17 student teams the funds to make their green dreams come true, ranging from alternative menstrual products to planting native plant species in 3 gardens; building a mobile solar charging station, installing water bottle filling stations, and energy-efficient hand dryers, and expanding composting capacity on campus. The Student Sustainability Fund (SSF) is “a resource for the advancement of sustainable practices, education, and infrastructure” on campus. The SSF Guidelines outline funding requirements for student-led initiatives that 1). are “environmentally, economically, and socially sustainable”; 2). demonstrate partnership with other sectors of the Clark community; 3). have an educational outreach component as well as a positive environmental impact. Each of the SSF’s four rounds of funding have received project applications in excess of its annual $20,000 allocation from student activities fund.)

ClarkiePalooza 2015, the big barbeque for first-year students on their first day of Orientation, was completely Zero Waste for the first time ever! Sustainable Clark collaborated with Clark Dining and Student Leadership to make the event one for the record books. Only 1/2 bag of landfill was collected during the entire event, which featured full meals for nearly 700 people! The Recycling Crew, Peer Assistants, members of CSC, and Eco Reps helped educate the Class of 2019 by ‘manning the cans’ to explain compost and recycling at Clark. Further Zero Waste firsts in 2015: the Clark staff summer picnic in July was also Zero Waste, as was Spree Day 2015 in April.

A major steam distribution line connecting the cogeneration plant to Goddard Library and the Academic Commons was replaced. This project was part three of our four-year, large-scale infrastructure upgrade to replace old, uninsulated, and leaky pipes. The new lines will save over 39,000 therms or 210 tons of carbon dioxide greenhouse gas emissions!

The stages at Commencement 2016 were decorated with beautiful native and resilient shrubs and perennials. All of those have now been planted around campus, increasing local biodiversity and providing food and shelter for wildlife, while beautifying our landscape. In some cases the new plants replaced old worn-out ones; in others, new gardens have been created. In all, over 100 new shrubs and perennials were added to Clark this summer!

Summer 2015: Granger Field received a new artificial turf surface and the previous padding was deemed to be in good enough condition that 75% was reused in the new installation. Also re-used at a rate of 50% was the rubber pellet and sand blend infill that supports the turf.

Water bottle filling stations were installed in Dana Hall, Hughes Hall, and Traina Hall. All of these stations were 2014-2015 project awards from the Student Sustainability Fund! There are two more stations also funded by the SSF that will be installed during the academic year, probably in Lasry Bio-Science and Sackler.

Maywood Hall replaced over 680 old-style lights in hallways, rooms, and kitchens with the latest technology LEDs. The new lights are much more energy-efficient and last much longer, too. Estimated annual energy savings are 77,747 kWh or 29 tons of CO2! Also saving energy – and therefore greenhouse gas emissions – we replaced oil boilers at 934 Main St. with high-efficiency natural gas ones, and upgraded the University Center’s air conditioning so it is now part of the campus-wide system operated from the co-gen.

The chimney of Clark’s power plant, located in Jonas Clark Hall, was replaced this summer. 420,000 lbs. of brick and 8,730 lbs. of steel from the renovations were recycled locally.

Summer 2014: Clark’s most significant summer 2014 project was in Alden Quad. New double-wall, insulated steam distribution piping, and condensate steam return lines replaced deteriorating, uninsulated pipes that were up to 50 years old (in some cases water-proofed with ground seashells). Underground piping was reduced by 300′ because the new lines run through buildings. Steam traps, flash tanks, and electrically pumped condensate tanks were updated or added to the Alden Quad system. Decades-old water heaters in Maywood Hall were replaced with high-efficiency condensing heaters. The extensive renovation will recapture 95% of the previous steam losses and save Clark between 87,000 and 130,000 mmBtu’s per year, a significant contribution to our Climate Action Plan goals. Although trees were removed to accommodate the new distribution system, the trees were fully repurposed locally as firewood or mulch. The new Alden Quad will be beautiful and much more usable. Landscaping includes over 80% native species of trees, shrubs, and perennials to feed and shelter wildlife; a rain sensor reduces irrigation; seating areas (some made with recycled glass) are complimented by open planting beds for future food gardens; erosion and runoff control is a result of contour grading. Compost and loam were added throughout.

The Dolan Field House now has 3 solar-powered path lights behind the baseball field. This model is being trialed for additional use on campus, and so far is working well. Dolan’s main gym was retrofitted with all LED (light-emitting diode) lamps, replacing the fluorescents that had replaced the halogens 3 years ago and illustrating Clark’s commitment to continual improvement as technology becomes appropriate. The LED’s have a life expectancy of up to 10 years and will reduce energy consumption by up to 30% over the fluorescent lamps. The soccer field was refinished in synthetic turf which will eliminate chemicals used in fertilizers, herbicides; eliminate CO2 from constant mowing; reduce line painting. Dolan also received upgraded VFD motors and system retrofitting.

Estabrook was outfitted with 210 new aluminum windows to replace the old wood and metal ones. The new windows feature clear, low-e glass to ‘filter’ ultraviolet and infrared rays (maximizing passive solar) while retaining light; the new windows also have screens so that fresh air can flow through the building. Shades add to the passive solar benefits.

Last but not least Grounds Dept.., Residential Life, Herban Gardeners, and Sustainable Clark collaborated to install three ‘edible landscape’ gardens around the Oval and in front of Goddard Library. Funded by the SSF and originally researched and designed by an EN-103 Sustainable University student team, these gardens represent nine months of planning, permissioning, and persistence. Reducing grass monoculture and providing food/shelter for birds, insects, and butterflies, the biodiversity-enhancing gardens will also reduce Clark’s carbon footprint from mowing and string trimming activity.)

Summer 2013 projects included a number of improvements to campus sustainability. Renovations to the Bickman Fitness Center reduced waste by re-using the rubber floor mats in the Rowing area and carefully preserving the wall mirrors for re-installation. We also donated 20 pieces of fitness equipment to Claremont Academy and Worcester South High instead of sending them to landfill. A hydration station and gender-neutral bathroom were also added.

Replacing approximately 560 feet of 25-year old, uninsurable, leaky steam distribution lines (Goddard Library, Wright Hall, Little Center, Estabrook) with double-walled insulated pipe (and re-routing through buildings instead of the exterior) is expected to reduce thermal losses from 1,800 Btu’s per foot to less than 80 Btu’s and provide a fuel savings of 20%.

‘Hydration stations’ to refill your reusable water bottle with chilled, filtered water were added in Goddard Library, Johnson-Sanford Center, and Maywood; with more pending installation this fall in Jefferson Academic Center and Dodd Hall. The hydration stations in the residence halls were purchased by the Student Sustainability Fund!

Energy-efficient air hand dryers were installed in bathrooms in the University Center, reducing waste from paper towels. The model uses 80% less energy than conventional blown-air hand dryers and dries hands completely and sanitarily in less than 15 seconds. These new hand dryers are a pilot program to see how our community responds to them, and measure the cost and resource savings. Sustainable Clark intern Marla Carrera-Raleigh ’15 monitored paper towel volume and labor costs to replace up to 6 rolls per day (and cart away the waste); indicating significant savings could be realized from replacing paper towels.)

LEEP and sustainability have a lot in common, starting with the opportunity to transform the world for the better and developing skill sets that transcend academic knowledge to address the challenges of an uncertain future. LEEP projects that directly impact Clark’s campus and our environmental footprint are the results of Sustainable Clark’s support of the LEEP initiative. READ MORE…Sustainable Clark is proud to have mentored and guided 13 Clark LEEP Pioneers in 2012-2015: Ben Gardener ’12; Gigi Chow ’14; Sam Mix ’14; Sarah Philbrick ’15, Gus Meissner ’14, Megan Grondin ’14, Eli Goldman ’16, Chi Le ’15, Lloyd Schramm ’16, Melissa Miller ’17, Carmiya Gale ’17, Hannah Rosenblum ’17 and Christopher Dibble ’17. Ranging from developing a campus master landscape plan to community engagement at the Thrift Store; creating a strategic plan for the neglected Hadwen Arboretum or monitoring campus energy use to impact positive behavior; building an agroponics unit to supply fresh herbs to the dining hall or evaluating green transportation options for faculty and staff,  the Sustainable Clark LEEP Project practitioners have all made significant contributions to sustainability research and project implementation at Clark while developing real-world skills for their future.