After a successful beginning to the second year of Clark’s Esports program, two teams are poised to make a deep run into their respective NECC Playoff brackets.

Overwatch Obsidian (8-1) has stormed to the top of the Navigators East division, capturing the number one seed going into the playoffs. After a shortened five-week season due to the transition from Overwatch to Overwatch 2, Obsidian excelled above the rest, rarely running into any speedbumps along the way.

Here’s what the standings look like after all the games have been completed: 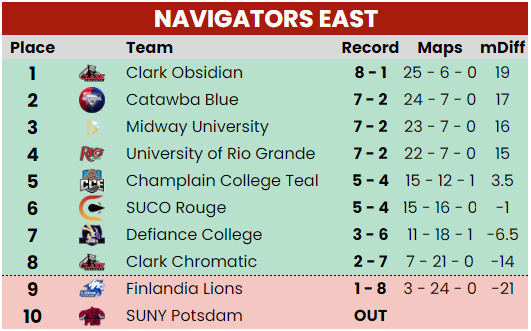 On their first official match as a team, Obsidian faced off against eventual two-seed Catawba Blue, defeating them in a five-game slugfest (3-2). Overwatch matches are played in a best-of-five format, or in other words, first to three.

After that victory, Clark managed to steamroll through every opponent in its path, winning the next six games without dropping a single map! This level of domination has not been seen many times before in Clark’s young esports history.

In week five, Obsidian was Midway University and the University of Rio Grande, two teams who would eventually end up in the top side of the playoff bracket. Midway was the first team in over a month to take a map off Obsidian, while Rio Grande handed Clark its first defeat of the year (3-1).

However, this minor setback won’t slow the team down. Obsidian captain Kristopher “Kamba” Cronshaw told me one of the main reasons for their first defeat was Rio Grande knowing how to get the most out of their composition, more than their Clark counterparts.

To account for this, the team has already started strengthening their comp overall and should be better prepared for the playoffs, including a potential rematch with Rio Grande down the road.

As for now, they’ll face off against sister team Clark Chromatic (2-7) in a first-round matchup that will surely make the university proud. While Obsidian is clearly favored based on record and previous meetings, it would be foolish for either team to take each other for granted.

Likewise, Valorant Grey (8-0) defeated everyone in their path throughout the regular season, securing the second seed in the Navigators Northeast division.

Here’s what their standings and subsequent playoff bracket shapes out as:

Valorant Grey has had a largely uncontested regular season run of dominance, finishing with a 16-2 map score over their eight victories. Unfortunately, the one team they did not face in the season was the Lambton Lions, who also went undefeated against the remaining competition.

They edged out the top seed in the playoffs from Clark with a 16-1 map record, with the two on a collision course for the finals of the Navigators Northeast division. It’s extremely rare to see two teams enter the playoffs with no blemishes on their record, but Grey is prepared for the challenges that come with playoff action.

Through improved communication and teamplay, the team excelled each and every week, only dropping one map to Montclair State and Trent Excalibur, respectively.

Grey already played their first playoff match, soaring past their first-round opponent, OWU Crimson in two maps (13-5) (13-8). They’ve advanced to a semifinal bout with Trent Excalibur, as they swept SUNY Potsdam with ease.

Valorant Grey took care of Ohio Wesleyan University once before, and they’ll look to do it again.

Only two more matches stand in the way of Grey’s division title. They don’t plan on letting anyone stop them.