Climate change is a problem of people. We already have the technology we need to mitigate and adapt to climate change in a manner that brings about sustainable development. 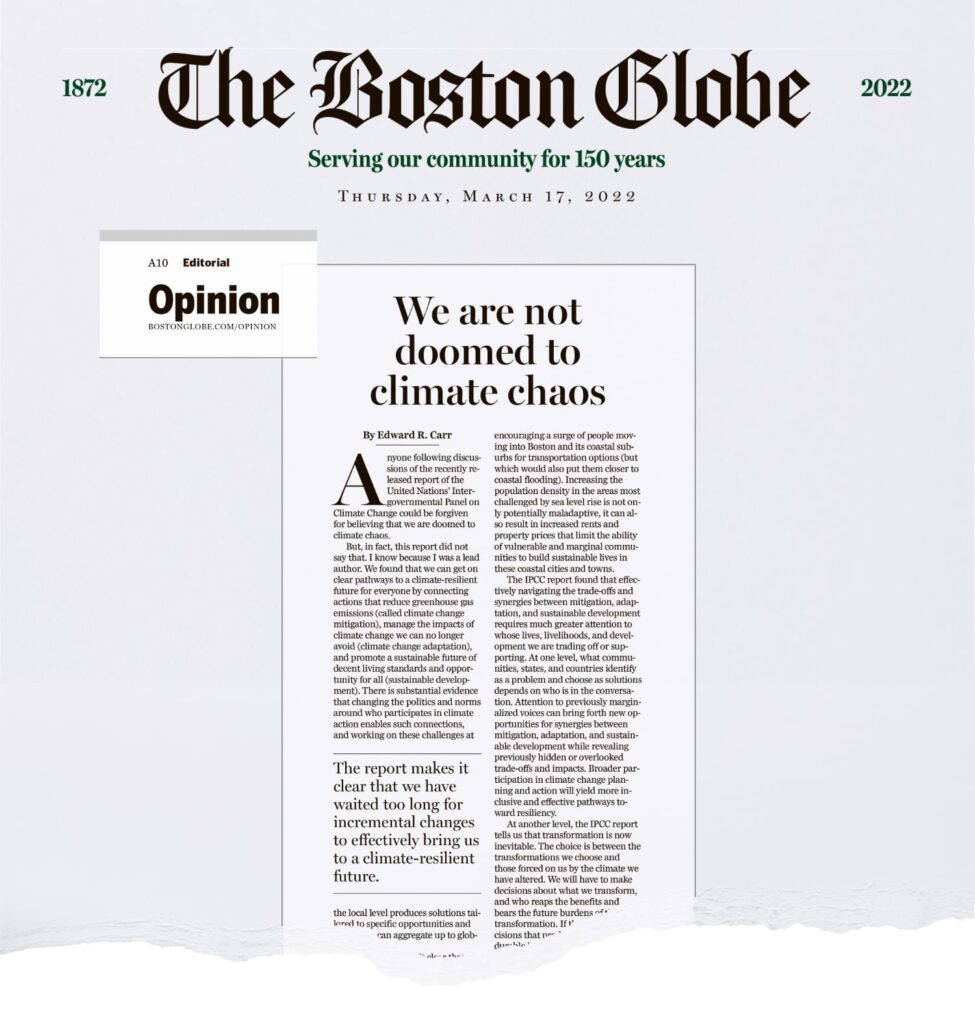 The following op-ed appeared in the Boston Globe on March 17, 2022, and is reprinted with permission.

We are not doomed to climate chaos

Climate change is a problem of people. We already have the technology we need to mitigate and adapt to climate change in a manner that brings about sustainable development.

Anyone following discussions of the recently released report of the United Nations’ Intergovernmental Panel on Climate Change could be forgiven for believing that we are doomed to climate chaos.

But, in fact, this report did not say that. I know because I was a lead author. We found that we can get on clear pathways to a climate-resilient future for everyone by connecting actions that reduce greenhouse gas emissions (called climate change mitigation), manage the impacts of climate change we can no longer avoid (climate change adaptation), and promote a sustainable future of decent living standards and opportunity for all (sustainable development). There is substantial evidence that changing the politics and norms around who participates in climate action enables such connections, and working on these challenges at the local level produces solutions tailored to specific opportunities and needs that can aggregate up to global impacts.

The report makes it clear that we have waited too long for incremental changes to effectively bring us to a climate-resilient future. This is not a message of catastrophe, but it does demand we think transformationally. We live within large structures, from our transportation networks to our massive, highly integrated global food system. Dependent as we are on these structures for our well-being, individuals have a limited ability to transform how they live on their own — a single consumer’s purchasing decisions will not shift the cultivation techniques of a global agribusiness. While we all have a role to play in addressing climate change, that role must include, and perhaps even emphasize, transforming these structures.

There are clear levers for change, even at the local level. The IPCC report presents evidence that one concrete path toward structural transformation lies in rethinking how we approach climate change mitigation, climate change adaptation, and the achievement of sustainable development. These three arenas have long been independent silos of knowledge and action, which a growing body of evidence indicates results in the greater likelihood of unwelcome trade-offs and compromises. For instance, efforts to manage sea level rise with a seawall can produce real adaptation benefits for those behind the wall. If that seawall displaces flooding and erosion onto vulnerable communities that cannot afford similar construction, it will compromise their pathways to sustainable development.

Should the Massachusetts Decarbonization Roadmap result in climate change mitigation policies that emphasize disincentivizing driving without also enhancing regional public transportation options and remote work options, the state risks encouraging a surge of people moving into Boston and its coastal suburbs for transportation options (but which would also put them closer to coastal flooding). Increasing the population density in the areas most challenged by sea level rise is not only potentially maladaptive, it can also result in increased rents and property prices that limit the ability of vulnerable and marginal communities to build sustainable lives in these coastal cities and towns.

The IPCC report found that effectively navigating the trade-offs and synergies between mitigation, adaptation, and sustainable development requires much greater attention to whose lives, livelihoods, and development we are trading off or supporting. At one level, what communities, states, and countries identify as a problem and choose as solutions depends on who is in the conversation. Attention to previously marginalized voices can bring forth new opportunities for synergies between mitigation, adaptation, and sustainable development while revealing previously hidden or overlooked trade-offs and impacts. Broader participation in climate change planning and action will yield more inclusive and effective pathways toward resiliency.

At another level, the IPCC report tells us that transformation is now inevitable. The choice is between the transformations we choose and those forced on us by the climate we have altered. We will have to make decisions about what we transform, and who reaps the benefits and bears the future burdens of that transformation. If these are to be decisions that produce both just and durable improvements to human well-being, then we will need to open up the political processes through which they are made. The processes that matter are not just global or national in scope. Effective climate action speaks to local circumstances — the local environment, economy, and society. Our climate future will emerge through local politics operating in the context of national policies and global initiatives.

Where once we emphasized science and technology as the bridges to a climate-resilient future, the IPCC report recognizes a fundamental fact: Climate change is a problem of people. We already have the technology we need to mitigate and adapt to climate change in a manner that brings about sustainable development. We have failed to act on it.

Our message of transformation is a message of urgency and hope. A climate-resilient future is still possible. It starts with changing who is in the conversation to better identify the challenges we need to address, the best ways to address them, and the just, equitable outcomes we expect from our actions. From these conversations will flow clear rationales for what we need to transform, what we want to keep, and why. This, in turn, will point us to the linked adaptation, mitigation, and sustainable development actions that will work to benefit the widest set of people in communities, states, and countries.

Edward R. Carr is director of the International Development, Community and Environment program at Clark University and a lead author of the most recent United Nations Intergovernmental Panel on Climate Change report.