Cailin Marcel Manson and His Work Toward Inclusivity in Opera 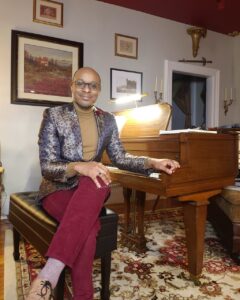 No singular word can describe Cailin Marcel Manson (he/him) and encompass what he does in its entirety. He is a singer, a conductor, a teacher, a collaborator, and so much more. Manson joined the Clark faculty in 2019 and leads the Clark University Concert Choir and Chamber Chorus. He also oversees the other music performance ensembles in the Music program and teaches/manages the performance-related curriculum, including courses in repertoire, conducting, diction, and performance preparation. Yet the scope of his work goes far beyond Worcester. He is also Music Director of the Keene Chorale, Music Director of Barn Opera, Artistic Director of the New England Repertory Orchestra.

Manson’s passion for singing and conducting took off in high school, where he described himself as an “armchair conductor,” and was fueled by help from mentors at school and in church. Now, as an advocate for community-based music organizations and after an extensive, international twenty-year career, Manson focuses on bringing greater representation and increasing accessibility for artists of all backgrounds to make their start in the industry.

“I was working with all these young Black artists […] and they really wanted to get into the business. […] and they just weren’t successful,” Manson says. “Some of it had to do with racial bias.” To combat this issue, he created a two-week program—the Germantown Institute for Vocal Arts—that allowed developing artists to get the skills and individualized training that they did not receive in their formal schooling.

“There were all these talented community members and the program allowed them to learn side-by-side with the young artists,” Manson explains. “So, you ended up building a network of support for these artists as well as educating the community more about the art.”

Manson targets inequality by leading with a belief in “bringing various communities […] together.” An example of this practice is his recent project, Unsaid Prayers, a self-commissioned musical work which premiered on Friday, February 25, 2022 at Clark University. The work was composed by Nicolas Gutierrez and was performed by Manson, soprano Katherine Saik, and harpist Jordan Thomas. The premiere concert also featured pieces by Black composers Robert Owens, Nadine Shanti, and Will Marion Cook. Several groups provided support and amplification of the project, including the Higgins School of Humanities and the Department of Visual and Performing Arts at Clark, as well as the members of the digital communities of the Black Opera Alliance, the Sphinx Foundation, the International Society of Black Musicians, and the National Association of Negro Musicians.

Unsaid Prayers is a song-cycle that sets to music poems by bi-racial poet and theatre professional Jana Lillie. Lillie’s poetry collection, also called Unsaid Prayers, was partially inspired by George Floyd’s killing and many of the poems were written in the three months following Floyd’s death. Manson talks about how he felt inspired by the poetry because it “was really able to distill into words the complexity of all of these feelings that was going on in our society.”

Manson remains committed to commissioning “musical projects that speak directly to our time and uplift excellent, emerging artists.” He says that, “If you see someone who looks like you doing it, and they are willing to show you the process of how they put their life together around being a practitioner of this art form, then it makes it more real.” While many young, POC individuals are interested in opera and pursuing it as a career, the inaccessibility of the field—often due to a lack of educational opportunities and financial support—makes it extremely difficult for them to get started.

Manson’s vision is to change that trajectory by highlighting the voices of minorities in his ventures. With his platform as a performer, educator and arts leader, he creates projects centering Black stories. He also puts on workshops to teach students how to get started within the opera world, emphasizing the importance of representation and mentorship within the field. Yet after years of advocating for and educating young performers, Manson has simple advice for students sharing a dream of pursuing the arts.

“Don’t wait,” he says. “Covid has taught us that, truly, tomorrow is not promised—the whole world can shut down tomorrow. Don’t wait.”