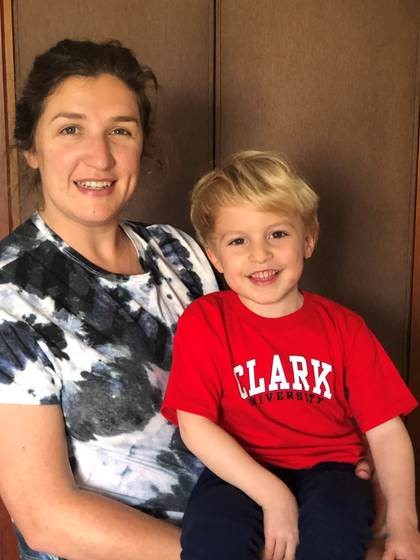 My husband, our toddler, and I live in Palma de Mallorca, Spain. Mallorca is an island about the size of Rhode Island in the middle of the Mediterranean, so we are pretty disconnected from the scenarios on the peninsula. That said, we have had about about 1,600 cases of COVID-19, including 120 deaths, in all four of the Balearic Islands. Strict lockdown measures are in effect here. Children aren’t allowed outside and people can’t travel between towns unless for work. One man was fined for walking his dog too much.

We can go to grocery stores, the pharmacy, estancos (newspaper/tobacco shops), and the bakery. If you tried to stop the Spanish from getting fresh bread every day you would have a mutiny.

We moved to Mallorca last June for an adventure — my husband is from here and his family are all here. Before that, we lived for seven years in Newport, R.I. I have been working for a small startup for the last six years and have continued working for them while living here. My husband works in real estate. His work has pretty much come to a halt; mine, too.

It is hard to be in a 1,000-square-foot fifth-floor apartment with a 4-year-old, but we have a balcony with a beautiful view of a park and the mountains, and we can look out at the sunsets.

Each night at 8, all of us who live in the apartments around the park go onto our balconies to salute and clap for the health care workers in this crisis. It gives me a sense of community — that we are all in this together. At the beginning, it was dark when everyone did this, so people would be flashing their phones and making a lot of noise, and the horns would be tooting from the yachts in the marina. We couldn’t really see who was participating.

Since the days are now longer, we can see many of the people who come out to clap — it feels a little strange to be doing this in the daylight because I’m suddenly conscious of who isn’t there. I find myself asking, Why isn’t that couple out clapping tonight? What happened to the bagpipe player who has been playing every night until now? Do they not care anymore? Have we lost the pure, raw feeling of “blindly” supporting others when we can’t see them?

One source of curiosity has been Paco. He lives in a hut in the park right outside our balcony. The park is well maintained and police go through it all the time, but for reasons unknown to us he is allowed to live there.

I see people walk their dogs by the park’s fence and ask, “Como estas, Paco?” (“How are you, Paco?”). I know there is a water fountain in the park, but I imagine people bring him food. Many people of various socio-economic means seem to check on him, which is fascinating. Who is Paco? Maybe he was well known in the community once and for some reason he’s chosen to live his life this way.

Paco claps with us every night at 8. Because he is the only one applauding in the park, his claps sound different than the others. They sound like an echo.